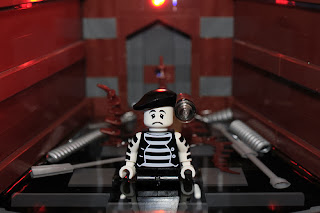 The Caldari militia put overwhelming numbers in the field today and captured Heydieles. Congratulations to them for their tenacity! We look forward to taking it back again.

Later Update: I'm told Heyd was at only 60% contested the previous night, so the Caldari worked very quickly and steadily to capture it.

Our evacuation to a nearby system went smoothly, with only some of the expected hassling from Old Man Gang who were, I'm sure, very happy to kick us in the butt as we left. I got caught in by a large smart bomb in an Imicus at a jump gate, and it also killed my pod.  OK, NOW I'm seeing a pattern. Remember a few days ago I lost a set of +2 implants by getting podded two days after installing them? Well, this time I only had a single cheap implant but I guess it was enough to invite the Curse Of the Self-Podding Implant to strike again! I've now been podded twice, within a day or two after putting in implants.
Posted by Brian at 12:52 PM